The Rise of Mobile Apps in Africa and the need of Translation! 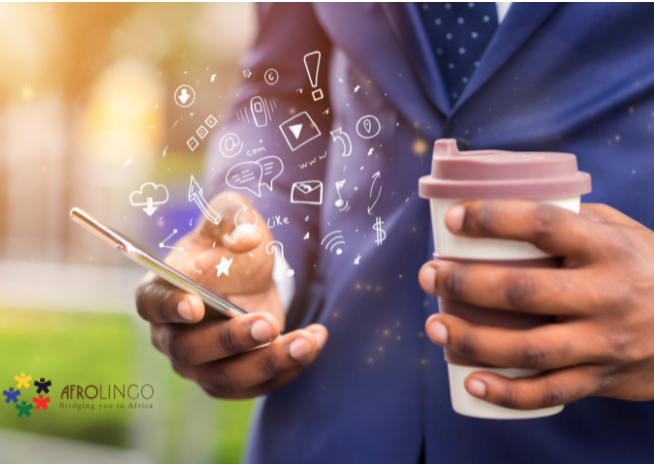 The story of mobile apps in Africa is very interesting, with an exciting last chapter for the time being. For more than one year starting from the first half-year of 2020 to the first half-year of 2021, the African mobile application industry increased by about 40 percent in overall installs. The highest growth was in Nigeria, with a 43% raise, then comes South Africa with a 37% rise, while Kenya’s mobile app market increased by 29%.

Good news that harmonizes with the global trend where, due to the effect of COVID-19, consumer spending in the area of mobile applications reached USD 64.9 billion in the first half of this year.

So, what about South Africa?

Is South Africa the Land of Gold or Mobile Apps?!

South Africa now has one of the most vigorous economies across Africa.  But it’s no longer the land of platinum and gold only. With a population exceeding sixty million people, the country has one of the highest rates of smartphone penetration in the African continent.

So, what proves that South Africa is increasingly one of the most important players in Africa’s mobile application market? Let’s start with the numbers one by one.

Then, lets’ sort out the crowd of South African apps. When it comes to the number of downloads, South African publishers’ apps have 47.13k downloads on average.

These are the top publishers from South Africa who accumulated the most app downloads?

And finally, quality matters, doesn’t it?

And now with these clear facts and figures demonstrating the great potential for the mobile apps market in Africa and particularly in South Africa, let’ move on to the question of mobile app translation. Is it feasible?

The Effect of Translation on Mobile App Penetration

Let’s face the facts. Whether in Africa or elsewhere, mobile phones are increasingly becoming part and parcel of everyone’s life, providing people with access to a wide variety of mobile apps in the palm of their hands. So, it’s logical to admit that mobile app developers who translate their apps into the native languages of their global audiences are the ones who will succeed and thrive in foreign markets.

But still, what are the benefits of translating mobile apps? Let’s dive deeper.

It’s one of the facts of life that people like to handle apps that they can communicate with in their mother tongue. So, if you introduce your app in Japan, do it in Japanese, and when in Rome, translate it into Italian, and so on.

When you translate metadata and keywords, you will ensure that your app’s visibility is boosted concerning the specific keyword phrase searches in app stores.

Translating the content of your mobile app results directly in more user engagement, with consumers recommending the app to other users, which ultimately boosts the success of your product in foreign markets.

So, now that mobile app translation is so vital, what then?

Simply, AfroLingo can help because we have an impressive track record in delivering app translation services that empower mobile app developers to multiply users and downloads in overseas markets.

From expert human translators to professional project managers, advanced translation management systems (TMS), we have state-of-the-art tech tools, the technical expertise, and the hands-on experience that ensure the success of your mobile app in South Africa, across Africa, and all over the world.

For more info about our mobile app localization services, contact us.