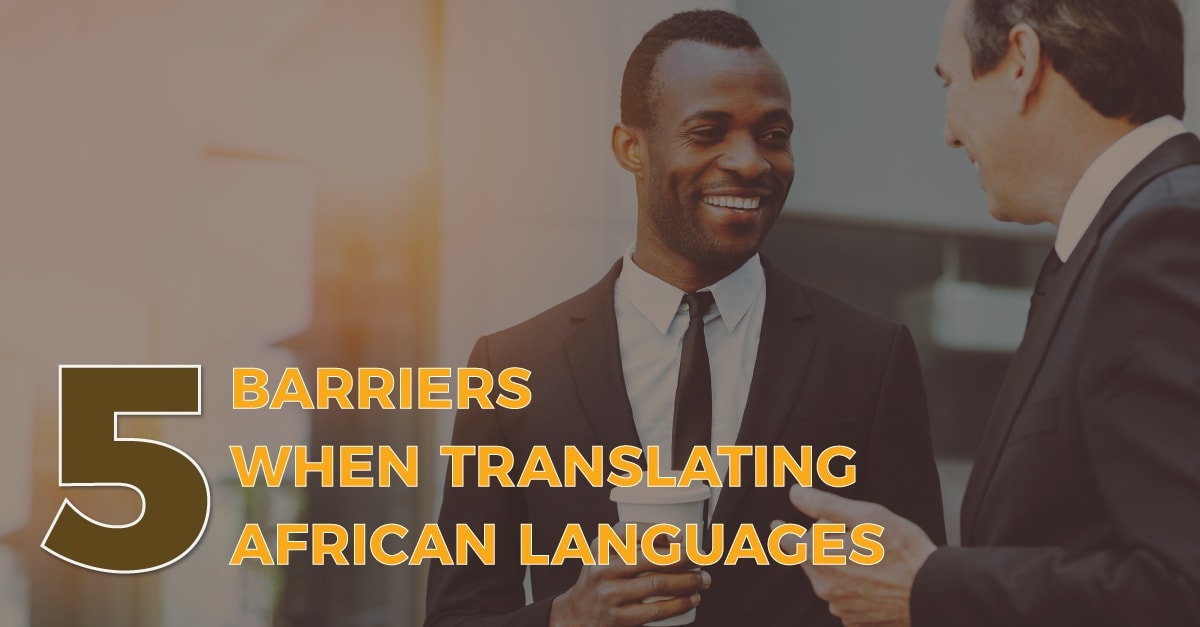 Over 2,000 languages are spoken in Africa and the average African is most likely to be multilingual. The eight major languages spoken by Africans who represent roughly 10% of the world population include Arabic, Amharic, Swahili, Igbo, Hausa, Berber, Oromo and Yoruba. Given that most of the top 10 world’s fastest-growing economies are in Africa, it is appalling to note that the translation revenue in Africa is only a small portion of the global translation revenue. This meagre translation revenue is largely due to the various translation industry barriers encountered by providers of African translation services.

The Main Barriers When Translating African Languages Include:-

1- Lack of Access to Amenities Such As Electricity and Internet

Providers of African translation services unlike their counterparts in other continents such as Europe and America face glaring problems of lack of access to electricity and internet. Those who are lucky enough to have access to electricity and internet often have to contend with frequent power outages and slow internet speeds. It must be said that these challenges are slowly being tackled by development-conscious African leaders who have chosen to invest heavily in infrastructure and ICT. African translation services are therefore poised to grow rapidly should this trend of development and economic growth continue.

2- Absence of Proper Education and Training among Translators

Lack of proper education and training is a major problem that not only affects the translation industry but also other industries as well in Africa. Professional providers of African translation services have to invest heavily in educating and training their linguists and translators unlike their counterparts in other continents who have a pool of well-educated and trained citizens to choose from. That said, education continues to be a priority among most African nations. In the near future, providers of African translation services based in Africa will also be spoilt for choice when it comes to selecting indigenous translators.

3- Lack of Linguistic Equivalence in Most Indigenous Languages

Technology and other factors have contributed to the expansion of vocabulary, terminology and competing terms among most major languages in the world. Unfortunately, most African languages are accorded poor status such that the young generation of Africans are pushed away from them. This means that most African languages do not undergo natural development but instead face extinction. Providers of African translation services often find themselves searching for linguistic equivalence in most indigenous African languages with no luck.

4- Inability to Network with Other Translators

Networking and collaboration among providers of African translation services would go a long way in promoting their services. Unfortunately, this rarely happens due to lack of access to tools such as Internet and restriction of free movement among some African nations. Fortunately, trade agreements are being signed every other day in Africa to help promote free movement of goods and people among African nations.

5- Lack of Political Goodwill in the Advancement of Indigenous Languages

The quest for rapid economic development and national integration by post-independence African leaders has led to the embrace of colonial languages such as English and French. This is to the detriment of indigenous African languages whose roles have been ignored. As such, there is little incentive among providers of African translation services to specialize in some indigenous African languages that are no longer being spoken.

About AfroLingo
AfroLingo is a leading provider of translation, content publishing, engineering and mobile localization services to clients seeking to appeal to the African market. With AfroLingo as your language service partner, you will enjoy highly competitive pricing, high-quality services complete with robust quality assurance and real-time interaction with the project team handling your assignment. Microsoft, FedEx, United Nations, Google, CAT and Nokia are some of the high profile clients that have sought and continually engage the services of AfroLingo. To learn more about AfroLingo, visit our website at and get a free quote today.