The Worst Translations You Have Ever Seen in South Africa 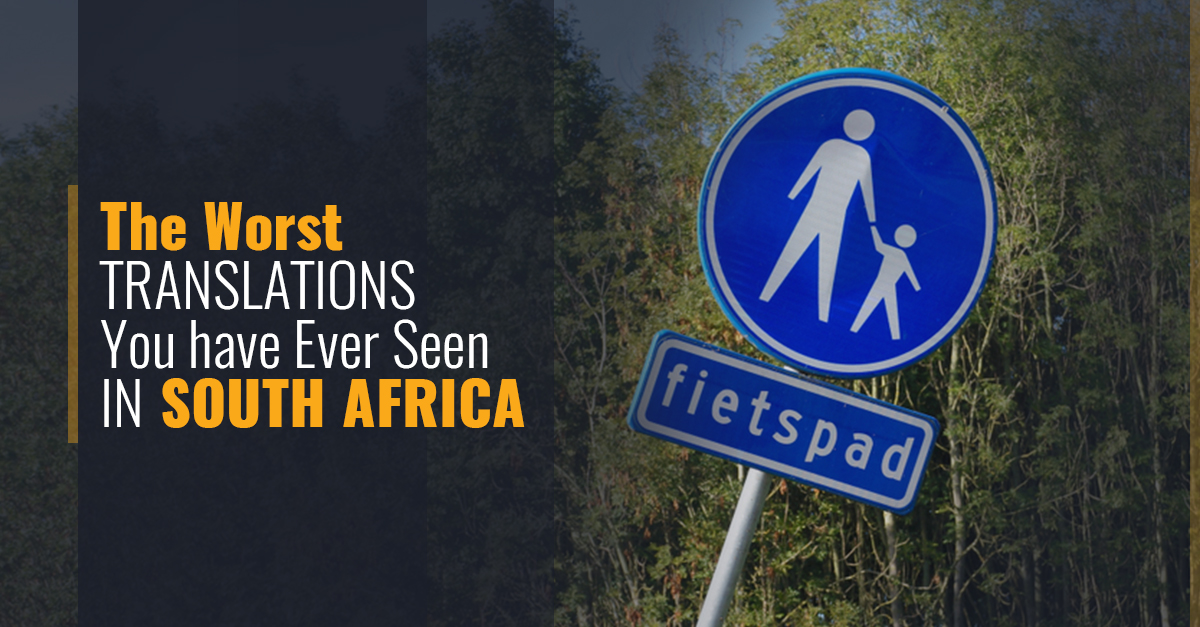 As online translation services began to explode onto the scene all those years ago, it left many believing that they no longer required the use professional translation services. When you consider that all it takes is to input your chosen text, choose the output language and your translated text appears like magic. Of course, as it has been translated by a website and therefore a computer that consists of clever algorithms, everyone believes that it has to be right. How wrong.

While online translation websites are good for translation words or sentences to gain a rough idea of what it might mean, they simply cannot be relied on. This is because you cannot beat using a real person who can provide you with the correct translation while providing equivalent words and meanings in the required language. Online translations are very hit and miss and often they are more miss than hit but that has given us plenty to laugh about over the years and it seems as though the fun isn’t stopping any time soon.

Why are wrong translations so hilarious?

They simply are because the translation is so far away from what it should actually say that it does not work. However, when you read the translation for what it is and actually realize that people have actually gone ahead and used it, it makes you wonder what they were thinking.

When you consider that airports in India are asking passengers to refrain from eating the carpet or that people are being offered Syrian paralysis cheese, you instantly realize that they have not used professional translators or interpreting services because the majority of English speakers will know that what they are reading is completely wrong. Still, when you consider that people are being asked not to eat the carpet you have to question who oversaw the translation of that particular sign.

The hilarity does not stop there because even news reporters are getting it wrong and that takes embarrassment to a whole new level.

What about Translation Mistakes in South Africa?

Well, the ridiculousness of the world of wrong translations does not stop there because even South Africa has had its fair share of embarrassing moments. There is even a translation error where a new reported got things terribly wrong while reporting on a drugs bust. As the report is initially being made in Afrikaans, the reported then decides to move onto an English translation and that is where things go downhill for him. This makes you wonder why they did not use professional translation services South Africa in order to make sure that the translation was correct and true. This would have meant that the report would have been shared across the internet for the right reasons instead of being shared many times for completely the wrong reasons.

The errors do not stop there in South Africa because back in 2005, Xhosa speakers in Western Cape had to put up with badly translated information signs and considering how bad the translations were, they should not be funny. Information signs are relied on by many and it makes you wonder why they did not use a translating and interpreting service to make sure that everything was completed correctly.

When you consider that an obstetrics department was called the “Department for Parents” or pamphlet based around the serious problem of aids was translated as “the Gift of Aids” it is clear to see just how important it is to get right. These are not small errors because they are errors that can cause serious problems for those who are affected by these issues. What also makes things even worse is that many banks and even government offices have failed to correctly translate documents proving that translation was once an area that was not considered by many in South Africa. Despite the seriousness of these errors, they have still had many people in South Africa sharing these hilarious translation fails around the world.

There is no doubt that these translations have got people laughing but there is a prominent message displayed here and that is the fact that translations have to be carried out correctly. Failure to get translations correct looks unprofessional and creates a buzz of excitement for all the wrong reasons.