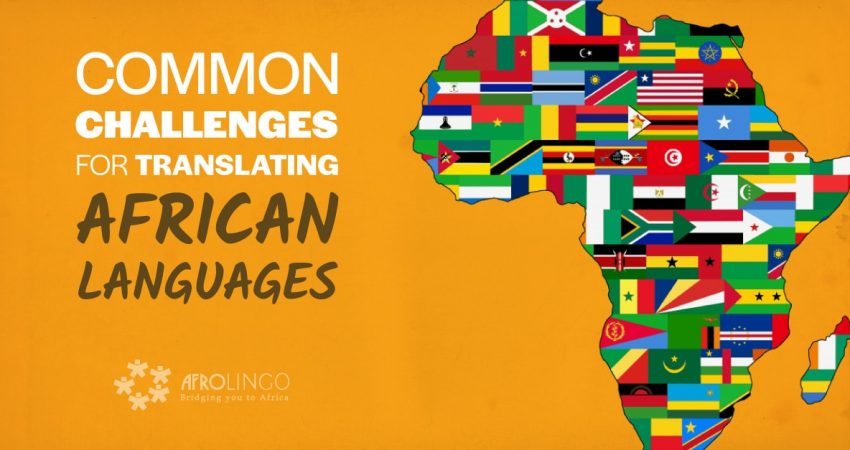 Africa is the amazing passionate diverse continent that’s completely unique among the 7 continents. However, being unique and distinctive is associated with remarkable challenges in many ways.

There are 6000 languages in the world; 2000 of them are in Africa, spoken by 1.21 billion people. Due to colonization, English, French, Portuguese and German are still dominating.

As everything is evolving, some languages tend to disappear. According to UNESCO, half of the world’s languages will be extinct by the end of this century. In Africa, there are 52 languages that have been lost, which means that there isn’t a single person on Earth who can speak this language and the language is no longer known. ǁXegwi, ǀXam, and Seroa are some of the extinct languages in South Africa.

But African governments are now realizing the seriousness of the situation and are working to encourage learning and studying their own languages. A lot of initiatives are done, for example:

All of these efforts are really appreciated by the African governments and how they are trying to preserve these languages. But the translation and localization industry in Africa still has a lot of challenges that affect the size of the industry and the workflow of the African translators. So  what are these challenges?

The demand for translation and localization of African languages is increasing, and it’s becoming a huge market that we can’t miss out. Linguists and translators are required for many fields such as the government sector, tourism, religious, as well as diplomatic affairs. Also translation is essential for such industries as agriculture, financial, technology and many more.

International companies started to know the importance of the African continent, so for example China started to invest more in Africa’s infrastructure – such as roads, bridges and railways -, and this is increasing the demand for translation services from Chinese into African languages. In general, the most common requests for translation and interpretation are for English, French,  Arabic, Portuguese, Swahili, and Amharic. But lately, there’s a consistent and high demand for translating indigenous languages. For example, in South Africa, 10 schools in Western Cape started a pilot project to teach Xhosa language to grade 1 students.

We can conclude from this that it’s becoming increasingly important to translate into African languages  documents, mobile apps, websites, legal documents and marketing materials, and that the demand for these languages will continue to increase.

But the road is neither paved nor easy! African linguists are facing many challenges if they want to be able to deliver professional translations. Let’s discuss some of these challenges

Unfortunately Africa is suffering from a very poor infrastructure in such areas as electricity, fixed-line telephones, and of course a stable internet connection. This definitely affects how  work, as they don’t have the luxury of using cloud translation platforms like Translation Management System (TMS), Glossaries, and other online tools. You can find some translators who are still using pen and paper to translate. This is make it tough for language service providers to take the risk and work with African translators, as they might miss a deadline or can’t cater to clients’ requirements of using specific software programs and tools.

Africa has around 2000 to 3000 languages and some of them are spoken by millions like Swahili, Hausa, and Arabic. Sometimes due to people’s ignorance of these African languages, you may find a company looking for a South African translation! What?!

South Africa doesn’t have one language but hundreds. This is something that frequently happens across the continent from companies that are working outside the borders of Africa. They don’t have any idea about the country and the diversity of its languages, how, where and when they are used.

According to the Borgen Project, 9 million children in Africa can’t attend primary schools and for every 2 children who go to school, one will drop out. While according to UNESCO, literacy in Africa is still below 60%, which means around half of the population still can’t read or write. Even though a lot of efforts are executed to improve the education system and encourage people to attend schools, still there are a lot of challenges, for example:

Consequently, African linguists sometimes fail to deliver high quality translation services and mainly their work volume is not like other linguists can deliver. A normal translator can deliver 3,000 words per day, while anAfrican translator, on average, delivers 1,200 words.

Besides, there are no strong university courses mainly for translation and localization and courses only cover the usual information about French, Portuguese, and English languages.

Most African languages are not documented and they were only used orally among African  people. Thus, you will find that the same language has different tonalities, sentence structures and different spellings.

Also there is no governance for African languages to control each language’s vocab, grammar and structure. For example, the Council for German Orthography is regulating everything related to the German language across all German-speaking countries. Similarly, the Irish language has Foras na Gaeilge. But lately, Nigeria has become one of the African countries that it’s taking effective steps for governing its languages. Then the following bodies were established as a result:

The African continent has only 10 organizations that regulate and supervise the work of translators. For example, The South African Translators’ Institute (SATI), the Kenya Interpreters and Translators Association (KITA), and the Nigerian Institute of Translators and Interpreters (NITI).

As for translation companies, for example an organization like Globalization and Localization Association (GALA) has no members from the African continent except a few from Egypt and 2 from South Africa. Therefore, these organizations are not enough for representing translators and linguists in 54 countries across the continent.

So what conclusion should we reach? Yes, translating African languages is both hectic and challenging, but still there is hope! Africa always proves that it’s the land for hope and eventually the African people are trying to make things better as they believe that the translation industry is one of the top factors that can positively impact their economy .

So if you are running a business or willing to open a business in Africa and you are thinking about these challenges, it’s better for you to partner with a professional translation company that will help you to avoid all this hassle.

As one of the local language providers, we are aware of what linguists are facing, and we believe that empowering them is one of our key strengths. So we managed to build a business hub in South Africa to overcome these challenges. So we managed to achieve the following:

So if you are looking for a reliable language service provider and you haven’t yet decided, contact us now and we will help you choose the best for you. 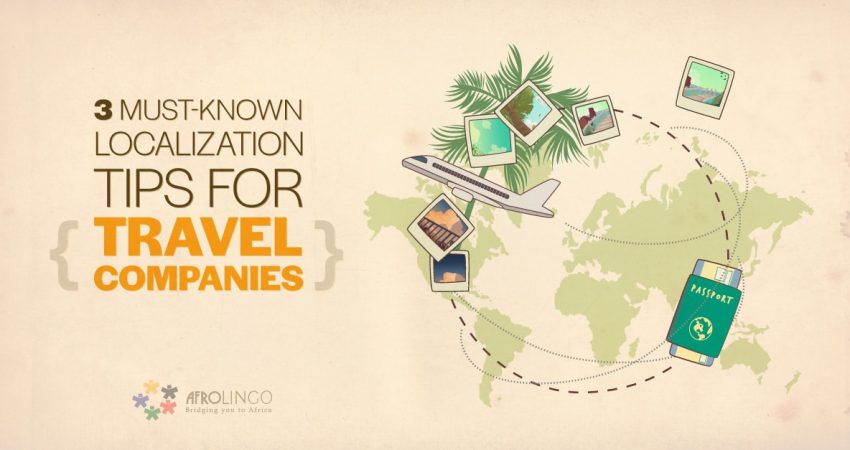 South Africa -The Rainbow Nation – exemplifies how a beautiful country with diversified cultures, racial and ethnic groups are united in one country. Therefore, it’s no surprise that it’s a well-known destination for tourists from different parts of the world. It has a variety of activities and adventures like wildlife, nature, sports, and beaches that make it a hot-spot for tourists.

In addition, tourism is remarkably contributing to the South African economy and providing a very strong economic value to South Africa as a country and to millions of people who are working in this sector. It contributed 29% to South African gross domestic product (GDP) in 2016 and 1.5 million jobs to the economy in 2018. According to a report by the World Travel & Tourism Council, South Africa is the largest tourism economy across the African continent.

When Tourism and Translation Industry Meet Each other

With the important role played by the tourism industry, it becomes necessary for companies to start translating their materials – like booking websites, brochures, guided tours, sales leaflets, and information bulletins – into many languages.

As a result, tourist and travel companies who are looking to expand their business know how important translation, is as it will help them to achieve the following objectives:

South Africa is now aware of the importance of translation due to the huge number of tourists pouring into the country every year. According to a recent report, India comes in the 3rd place among the countries whose citizens visit South Africa (13 thousand Indians every year); then comes Germany and France. This will definitely create a huge impact on the tourism industry and how it becomes a must for companies to start translating and localizing their content. Tourists now are booking their flights, hotel reservations, tours and even tickets for museums and historical places online. So the chances of reaching more customers are higher. As a result, translation companies in South Africa have equipped themselves with linguists with extensive experience in the tourism industry. But in order to achieve the maximum results, we recommend to consider some important tips when translating online for international tourists:

Travel companies are hitting customers from different countries, cultures, and languages; that’s why localization is important. But first, companies should start with deciding which specific countries want to focus on them. For South Africa, the target markets are mainly the USA & the UK; so they need to follow a few steps to ensure reaching more clients:

By doing so, customers will feel that these travel agencies are talking to them in particular and a good bond will be created between the customer and the company.

In the internet era when everyone is managing everything from his mobile device, 80% of travel bookings are now done online, something on which travel companies should not miss out. They need to create their websites to be mobile friendly or to create mobile apps to promote their travel services.

Another important thing is securing these websites and apps, as people are using their personal and payment details to make the reservations; so it’s very crucial to secure this data and make sure it won’t be hacked, as if this happen it will ruin the reputation of the travel company.

Despite the huge role of machines and robots, machine translation still is not the best option for translating travel websites and materials. It comes with a lot of errors and needs a second eye to maintain accuracy. So if you are looking for translation services in South Africa for your travel business, we recommend to hire a translation company that can talk to your target customers in a friendly and enticing way.

There is no room for poor translation when it comes to travel companies, as you are talking to your customers to convince them to trust you and book their next vacation with your company. So take care and make sure to partner with a translation company in South Africa that has a strong experience in providing timely, accurate translation.

There are certain pages that every customer will be checking in your website, like the booking pages, feedback pages, the about us page and Contact us page. Also you can double-check these pages by analyzing your Google Analytics and see which pages attract more visitors.These pages are the touchpoints that need to be well translated and localized, as they affect your brand’s name.

AfroLingo is one of the translation companies in South Africa that is committed to achieve the highest-quality translation services for travel companies acrossSouth Africa. An ISO 17100 certified company, we follow the international standards of translation, aiming to build a strong partnership & trust between us and our clients. So, if you are running a business in the tourism industry and looking for a translation company in South Africa, we are  pleased to arrange a meeting for you with one of our sales team to discuss the best language solutions that fit your business.